“Researchers with Stanford University and Massachusetts Institute of Technology recently released a study detailing reasons why California should keep its last remaining nuclear power plant open past its expected closure date in 2025.

Why talk about keeping Diablo Canyon open now? Though some may wonder about the timing of the Stanford study — we’re just about three years shy of the first of Diablo Canyon’s two nuclear reactors going offline — it comes as California’s energy grid faces serious challenges. Rolling blackouts plagued the state in 2020, with thousands without power in the middle of a record-breaking heat wave.

What are benefits of keeping power plant open? According to the study, the benefits of keeping Diablo Canyon open even just 10 years past its closure date in 2025 include A 10% annual reduction of California’s power sector carbon emission; A reduction in the state’s reliance on natural gas; The potential for new clean energy sources such as hydrogen fuel production; A source of desalinated water in a time of drought, and Helping the state avoid more rolling power outages such as the ones that hit in 2020. Additionally, the power plant would save ratepayers a total of $2.6 billion if kept open another 10 years, and an estimated $21 billion if kept open 20 additional years, researchers said.” 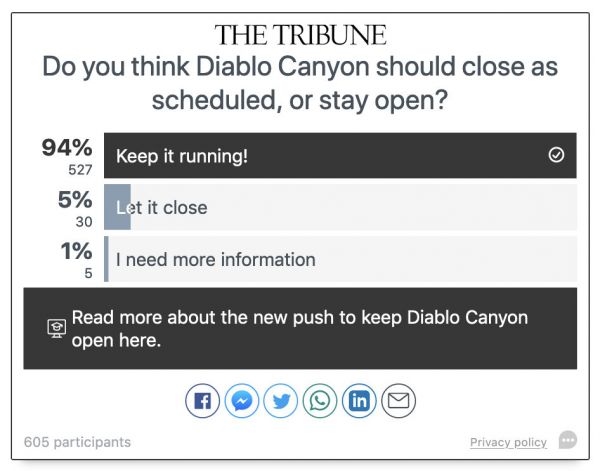