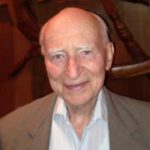 Born in Brazil 1929, Raul Brenner was attracted to science of electricity and its generation as a child. After graduating with a degree in Electrical/Electronic Engineering, he landed a job as an Electronics Instrumentation Designer at a nuclear research reactor in São Paolo.
Recognizing the job opportunities in the nascent field of nuclear engineering, Raul immigrated to the U.S. in 1963, and quickly found work designing electronic instrumentation for nuclear research at Argonne National Laboratory. In 1984 he switched to the private sector, designing radiation instruments for commercial applications. About his lifelong fascination with nuclear energy, Raul says, “When I became aware of the enormous potential of nuclear fission I could immediately see its great importance for our future human civilization.”